Jazz trio Trichotomy will present their suite of works for piano/bass/drums and string quartet, these pieces featuring the trio’s signature intensely rhythmic and dynamic style merging with cutting edge string parts. Included will be a new work written specifically for DeClassified Music 2014, this suite being followed by a performance of the jazz-influenced work Facing Death for amplified string quartet by Dutch composer Louis Andriessen.

Life gets in the Way – Parker 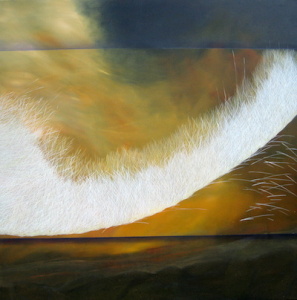 Courtesy of the artist and FireWorks Gallery

Sun Rai (Rai Thistlethwayte in solo jazz mode) and drum-gun Ben Vanderwal are touring Australia in September for their most extensive tour yet! In April, the musically elastic duo sold out Venue 505 and their gig at the Perth Int’l Jazz Festival and received rapturous responses everywhere they went. This run will be be no different – especially with the addition of 2 big shows as part of the Sydney Fringe Festival, of which Rai is an Ambassador. Expect a night of serious musical telepathy, intricate beats, and some gratuitous synth bass action!

Sun Rai (pronounced “sun ray”) is the moniker chosen by Rai Thistethwayte for his latest musical endeavors. The new name represents a fresh start for Rai… plus it’s a whole lot easier to spell.

Rai grew up in Sydney, Australia. His mother was a classical piano teacher, and his father was a language teacher who played bass and guitar in local rock bands. Influenced by his parents, Rai developed an appreciation for a wide variety of music, including classical, rock, pop and jazz.

After high school, Rai was awarded a scholarship to the Sydney Conservatorium of Music where he studied jazz piano. But before he could finish the program, Rai came to the attention of Columbia Records in the US, and signed his first record deal.

Before his first album was released, however, Columbia Records experienced a management shake-up, and Rai was released from his contract. He returned to Australia and started Thirsty Merc, a rock band which over the next ten years would release three successful albums (one platinum, one 2x platinum in Australia).

After the third album with his band, Rai decided to take a break to focus on writing music that incorporated jazz and his other early influences. Thus, Sun Rai was born. In 2012, Rai came to Los Angeles and started writing and performing. His music soon attracted the attention of the LA music community including tastemakers like Chris Douridas of KCRW.

Sun Rai has released three EPs, and has performed extensively, landing opening slots on tours with Bernhoft and Oh Land.

Rai divides his time between Los Angeles and Sydney. He’s planning to release more Sun Rai music in the coming months. And later this year he’ll return to Sydney for the relase of a new Thirsty Merc album.