A shining light of Americana, New York-based Frisell is “the most innovative and influential jazz guitarist of the past 25 years” (The Wall Street Journal) and has collaborated with some of the greatest pop artists of our time including Elvis Costello, Paul Simon, Sting, Brian Eno, Lou Reed and Marianne Faithfull, along with jazz luminaries John Scoffield, Chick Corea, Ron Carter, Pat Metheny and the late Charlie Haden.

Head on down to Black Bear Lodge (Brisbane Fortitude Valley Mall) this Sunday (16th December) 6pm to check out my latest Oxford Parker show. 16 years in the making! – And it’s FREE!!

Super excited about playing with Stephen Magnusson again. It’s been too long!

In addition to winning the Melbourne Music Prize in 2013, Magnusson’s Magnet (on LP and CD) won the 2013 Bell Australian Jazz Award for Contemporary Jazz Album of the Year.

The music is primarily groove based exploring sounds and textures within Magnusson’s unmistakable sound.

“An artist with nothing to prove but much to say.”
– All About Jazz, USA

We’ve been rehearsing hard with Expressions Dance Company.  To be more precise the band has been sitting around playing music whilst the AMAZING dancers get all puffed performing incredible displays of strength and grace. This is going to be a fantastic show!

On Wednesday 11th May, the classical storm known as Plexus will perform a new work of mine specially commissioned for their Pulsations concert.

You can check out details here:

Working in the band for this QTC show at QPAC. Great musos and singers/actors. I’m having lots of fun.

Really excited to be part of this. New arrangements of our tunes for chamber orchestra and jazz trio (that’s us). It’s going to be fun! – Tickets available here: http://qso.com.au/current/qso-trichotomy 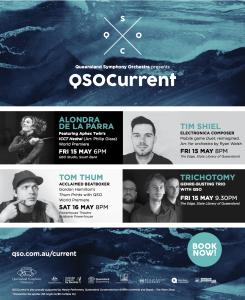 Trichotomy takes its genre busting sound to new heights in an evening of wonderfully unpredictable, absorbing and distinctive music. The trio’s engaging improvisatory interplay will be perfectly matched by the textural depth and rich harmony of 11 QSO musicians, underscored by the intensely rhythmic sound that Trichotomy has made its own.

Reminiscent of sounds from Steve Reich, Pat Metheny and John Zorn, this concert will feature new Trichotomy material plus inventive re-workings of a range of work from previous albums.

This is the acclaimed Brisbane based contemporary music trio’s debut performance with QSO musicians.

As The Edge is a licensed venue, children under 18 years of age must be accompanied  by a responsible adult.